Everyone, always, has something to learn: An executive coaching case study (Part 2 of 2)

And so our journey together began.  From my point of view in the main I found Arif very coachable and by this I mean he really took on board the models I presented and would use them rigorously.

It seemed to me that what Arif needed to start off with was a good dose of self-awareness which of course lent itself perfectly to ARCA (see diagram below) and to this day it is rare that we would have a conversation when we wouldn’t refer to it in some way or other. 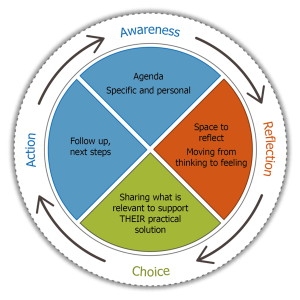 In preparation for this case study I asked him what he first thought of the coaching to which he replied, “I stubbornly thought that I was a leader and so had nothing to learn. How were you going to help me lead?  What I soon found out was that you had a way of bringing to the outside the feelings and thoughts that were on the inside. You taught me to take responsibility for my actions and what was going on around me by giving me tools and helping me know what to use when.  You often asked me ‘….so what could you do?’”.

What worked particularly well was the balance of our discussions between his commercial and behavioral goals. When we first met it was June and as that FY ended he fell just short of his budget reaching 97% of his EBITA. Given it was his first year in the role it was considered a success but he was deeply disappointed by not having gotten the high status title he’d expected. Status far outweighed his need for financial recognition.

So we worked away, meeting almost monthly, on ensuring he started to recognize the benefit of what he called “fluff (or soft skills as we’d prefer to call it). This was a gap in his leadership capabilities but his team who followed him from his last role thought the world of him nonetheless.

It was always much more a case of making him a better leader, not of fixing a bad one.  His approach may have been seen as too familial from the outside but you cannot deny that his team worked together seamlessly.  A large part of the reason for this was probably that many were from a similar cultural background – in fact they had all followed him from his previous employer. Which was good for Arif but could be problematic as the team grew.

We did have a four month stand off period around the end of the calendar year whilst he was going through a very difficult personal time. His CEO supported him all the way as did his team but it did require flexibility and belief in him. With lesser CEO’s this could have been his undoing but it was this very time when his team truly stepped up (as a family would).

I was deeply concerned at this time that the situation may get the better of him but to his credit he came back with strength and determination and in fact our coaching relationship just went from strength to strength.

By the third quarter of this financial year, he was already 92% up on last year and kicking some hefty goals:

The real good news is that last month not only did he get the big title he wanted, but he finished the FY 163% above budget and won the “Fastest growing office for the year”.

In the end I don’t really know if our very different backgrounds helped or hindered the coaching relationship. Maybe it made communication harder at times but, as we both approached the relationship positively, perhaps the extra effort we both put in to listening paid dividends. I do know that we’ve evolved to a point of huge mutual respect, and I regard him as one of my finest and most successful clients.